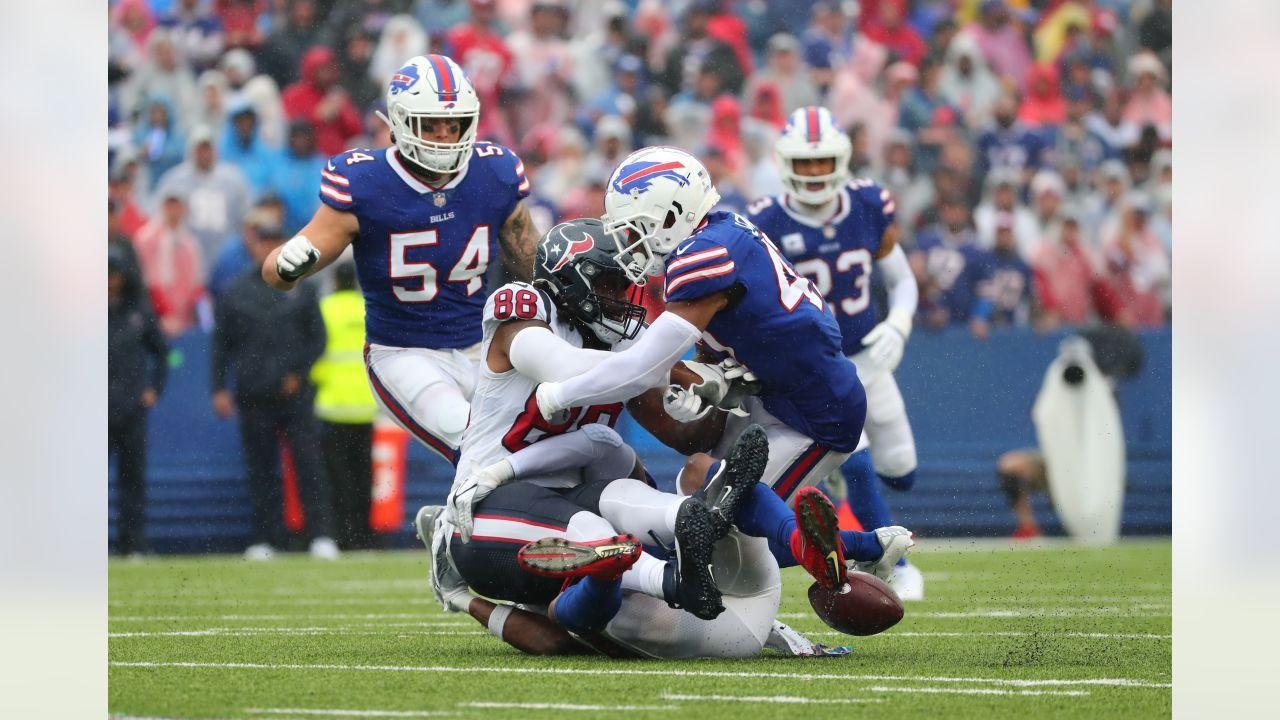 The Buzz
Walking into the fourth week in the 2021-22 NFL season, both the Bills and Texans had pretty similar records. The Bills were at a 2-1 record, while the Texans had a 1-2 record. The Bills were on a two win streak, while Houston was in the hunt for their next win. Bills coach Sean McDermott was looking for his first win against the Texans, as he had a 0-2 record as head coach. So, let’s go back to October 3rd, 2021 at 1pm, shall we?

The first pass of the game went to the Bills, as quarterback Josh Allen threw the ball downfield with 12:22 left in the first quarter. Unfortunately for Allen, Texans cornerback Lonnie Johnson intercepted the ball to turn it over to the Texans after running it inside Buffalo’s 15 yard line. Houston was unable to get the ball into the end zone, after being held to 4th and 2 on an incomplete pass. The Texans’ first first down of the game came with 8:22 remaining in the first quarter by runningback Mark Ingram Jr. Texans quarterback Davis Mills throws a pass downfield with 7:09 remaining, which is picked off by Bills linebacker Tremaine Edmunds, turning the ball over to the Bills. With 4:00 remaining in the first quarter, the Bills have a fourth down with only one yard to go. Allen carries the ball and runs for it, picking up the first down and more, making it to the 35-yard line. With 2:08 remaining, Allen fakes a pass attempt and then launches the ball downfield to Bills tight end Dawson Knox, who makes to the end zone for the first touchdown of the game, taking the score to 7-0. Houston receives the ball, but after they are caught in the backfield, no forward progress is made. The ball is punted to the Bills to start off the second quarter.

The Bills waste no time in the beginning of the second quarter. Allen has pressure from multiple players from the Texans defense, avoids all of them, and slings a pass deep downfield to Bills wide receiver Stefon Diggs. Diggs catches the pass on his tiptoes, staying just inbounds at the 20 yard line to give the Bills another first down. With 14:39 remaining, Allen is preparing to pass when he is taken down by Texans linebacker Whitney Mercilus. With 13:58 remaining on a 2nd and 15 play, Allen launches the ball downfield to Bills wide receiver Emmanuel Sanders, which brings up 3rd and 6. Unfortunately, Allen throws an incomplete pass intended for Knox, bringing it to 4th and 6. With 13:09 remaining, Bills kicker Tyler Bass comes onto the field for a field goal attempt, which he completes. This takes the score to 10-0, with the Bills still in the lead. With 11:34 remaining, Mills is looking to pass when he is taken down at the 2-yard line by Bills defensive end Boogie Basham. With 10:29 remaining, Allen hands off the ball to Bills runningback Zach Moss, who runs for a first down and more. With 10:00 left in the second quarter, Allen fires a pass to Sanders, who picks up the first down. With 7:55 remaining, Allen hands the bass to Moss, who gets caught in the backfield and loses a yard, bringing up 4th and 2. Bass comes back onto the field to kick another field goal and makes it, which brings the score to 13-0. With 6:19 left, Mills is looking to pass when he is sacked by Bills defensive tackle Star Lotuleilei, bringing it to a 4th down. With 5:28 remaining, Allen launches a pass downfield to Sanders, who gets the first down. With 4:22 remaining, Allen hands the ball to Bills runningback Devin Singletary, who runs it for a first down. With 2:47 remaining with a 3rd and 1, the Bills try to push through to a first down but are pushed back by the Texans defense. With 2:00 remaining on a now 4th and 3 play, Allen throws the ball downfield but it is an incomplete pass. With 1:49 remaining, Mills throws the ball, but it is tipped and lands in the arms of Bills safety Micah Hyde, resulting in another turnover. With 0:49 remaining, Allen throws the ball to Sanders, who once again picks up a first down. With 0:30 remaining in the second quarter, Allen passes the ball towards Zach Moss, but Moss can’t hold onto it and it is an incomplete pass. With 0:26 remaining in the half, Bass returns to the field and makes his third field goal of the game, bringing the score to 16-0.

Third Quarter
With 14:54 remaining in the third quarter, Allen passes downfield to Diggs, who picks up the first down and more. With 12:59 remaining, Allen launches a pass downfield to Sanders, who picks up 20 yards and Buffalo’s only second third down conversion in the whole game. With 11:23 remaining, Allen passes off to Sanders once again, who cuts to the left of the field and runs for another first down. With 8:54 remaining, Allen throws the ball into the endzone, but that pass is nearly intercepted and ends up being an incomplete pass. Bass is brought back on the field to kick his fourth field goal of the game and drills it, making the score 19-0.

Fourth Quarter
With 13:34 remaining in the fourth quarter, Allen fakes on a handoff and passes to Knox in the end zone, receiving their second touchdown of the game. This takes the score to 26-0. With 13:09 remaining, Mills passes downfield to Texans tight end Jordan Akins, but Akins can’t hold onto the ball and fumbles it. It’s picked up by Bills linebacker A.J. Klein. With 11:36 remaining, Allen fires a pass downfield to Diggs, who picks up the first down to make it 1st and goal. With 10:49 remaining, Allen hands off to Moss, who runs it into the endzone for a touchdown, taking the score to 33-0. With 8:16 remaining, Mills passes, looking to make it closer to the endzone, but it is picked off yet again by Bills safety Jaquan Johnson. With 7:24 remaining, Allen hands off the ball to Singletary, who breaks multiple tackles to pick up another first down and more. With 4:31 remaining, Bills backup quarterback Mitch Trubisky hands off to Singletary, who once again breaks multiple tackles and picks up another first down and gets down to the 5-yard line. With 3:46 remaining, Trubisky fakes a handoff to run it into the end zone himself and gets the touchdown, taking the score to 40-0. With 1:32 remaining, Mills launches a pass downfield, but it’s tipped and lands in the arms of Bills linebacker Tyler Matakevich, which leads to the end of the game.

So… why is it a favorite?
This game holds one of my favorite spots for a few reasons, and one of those is because it was actually played on my 21st birthday. Another reason is that it was a shutout game, which you don’t see very often in the NFL. I remember hearing from football fans that were watching it who weren’t fans of either team, but turned it on just because it was a shutout. It was an incredible game to watch, and I’m sure it’s one that I will be rewatching in the future.