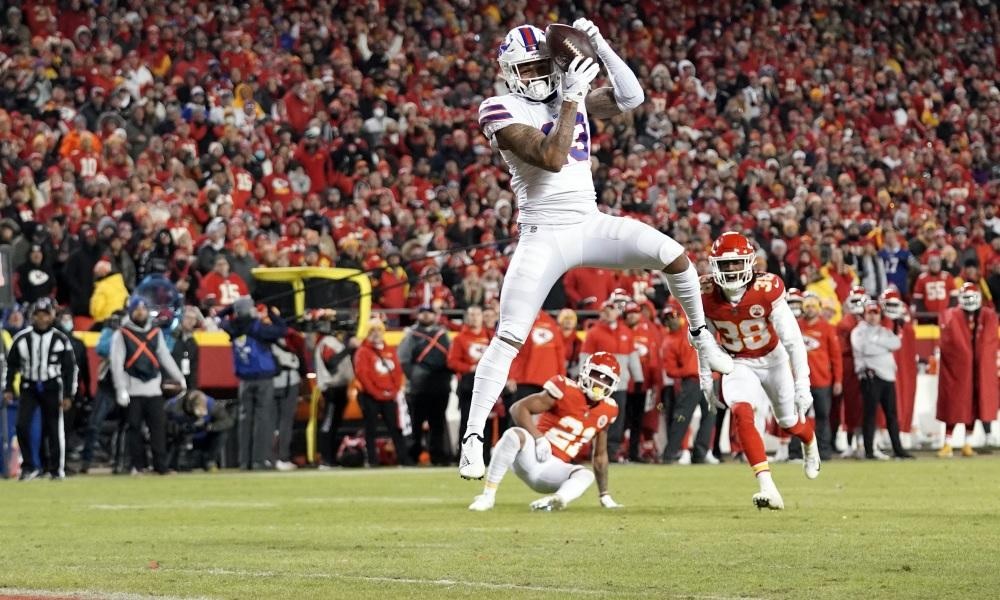 Everyone knows about the rivalry between the Buffalo Bills and the Kansas City Chiefs. In the 2021 playoffs, the Chiefs beat the Bills in the AFC Championship to advance to the Superbowl again. This kicked off a rivalry that will last for years to come. After the Bills bested the Patriots and the Chiefs beat the Steelers in their Wild Card rounds, the news was out: the two teams would face each other once again in the playoffs, this time in the Divisional Round. The instant tension that surrounded every fan of both teams was indescribable, and the energy was electric for the next eight days. On January 23rd, 2022, the tension and energy came to a peak when both teams took the field at Arrowhead Stadium.

With 8:08 remaining in the first quarter, quarterback Josh Allen tosses the ball to running back Devin Singletary to run it into the endzone for the first touchdown of the game, which took the score to 7-0. With 2:38 remaining, quarterback Patrick Mahomes swerves around multiple Bills defensive players to almost get a touchdown, but just barely missed the pylon, picking up a 1st and goal. This play led to a touchdown, taking the score to 7-7.

Third Quarter:
With 2:13 remaining in the third quarter, Mahomes passes to wide receiver Mecole Hardman who rushes into the end zone, taking the score to 23-14. With 2:06 remaining, Allen fires a pass downfield to Davis who once again runs it in for a touchdown, making the score 23-21.

Overtime:
In overtime periods, there’s always a coin toss, during which the winning team gets the ball first. In this case, the Chiefs won so they got the ball. With 10:50 remaining in the overtime period, Mahomes launches a pass into the endzone which was caught by tight end Travis Kelce. This was the final touchdown of the game, which resulted in a 42-36 win for the Chiefs.

So… why is it a favorite?
This game actually still breaks my heart to this day, and probably always will. Very few Bills fans like talking about this game for obvious reasons. For thousands of people, they’ll always remember “13 seconds” and the coin toss. So, if it was so heartbreaking, why does it rank in my favorites? For one reason, and one reason only: it was one of the greatest games in football history. There was not a single moment in this game where it was a guaranteed win, and both teams were fighting for that win during every second. Also, after the game, Mahomes ran across the field to hug Allen and show him his respect. That was a huge show of sportsmanship, one that fans from both teams appreciated and said that it was amazing to see. Also with the coin toss, fans of multiple teams were saying that both teams playing in a football game should get a chance to have the ball in overtime, like in college football. As a result, the overtime rule was changed to just that in March. Both teams will now get a chance at possession, and if both teams score and it’s still tied, the next score is sudden death and will win the game. As much as the ending result of this game hurt, it was a phenomenal game that changed football forever, and one that will live on in the hearts of many, whether it’s good or bad.