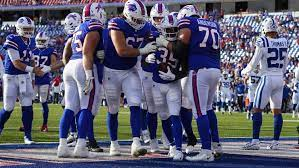 The Bills walked into preseason looking like they were absolutely untouchable. Everyone remembers “13 Seconds” from the playoffs, where it ended in an overtime loss against the Chiefs. That gave the team and management six months to sit, dwell, and prepare. And prepare they did. They were able to sign defensive player Von Miller, who was coming from the Rams after their Superbowl winning season. After backup quarterback Mitch Trubisky went to the Steelers, the Bills signed Case Keenum as their new backup QB. Since Keenum is a 10 year veteran, the Bills were more than happy to have him, and Keenum was “happy to be wanted”. There were many other great draft picks, and throughout the offseason, fans and players alike were getting more and more excited for football to begin.

The Bills first preseason game against the Colts was a nail biter to the very last second. I was lucky enough to be at that game, and it was actually the first Bills game I’ve ever been to. The Bills were down 24-10 with 10 minutes left in the fourth quarter, and it was starting to look like they weren’t going to be able to make a comeback. All of a sudden, they scored a touchdown with 8 minutes remaining, but they failed at getting a two point conversion, bringing the score to 24-16. Then they scored another touchdown with a successful two-point conversion with 3 minutes remaining to tie the game at 24-24. The Bills finalized their first comeback of the season with a last-second field goal completed by kicker Tyler Bass, winning over the Colts with a score of 27-24. One of the highlights of the game was absolutely the punt made by rookie Matt Araiza (also known as Punt God) which was a stunning 82 yard punt. Even the announcers for the game were shocked, with one announcer saying “What?!” as they said how many yards the punt was. It was a great game to see, and it gave the upcoming season even more excitement to be had.

This was a HUGE win for the Bills, especially in the game stats. This game made 10 consecutive preseason wins for the Bills, which was the second longest active streak in the NFL. This was also the largest scoring win in the preseason for coach Sean McDermott, with their 42 points. They also scored a touchdown on 6 of 7 possessions and had 511 yards on their offense.

What Could Stop The Bills? Well…

The Bills were coming off two wins already, their last game being a huge win, and they only had one game left. There was nothing that could slow them down at this point in the preseason, right? Well, that was almost true. On August 25th, gang rape allegations against Matt “Punt God” Araiza came to light. The incident occurred while Araiza was a student at San Diego State. The accuser, who was 17 years old at the time of the incident, named Araiza as one of the men who assaulted her at an off-campus party in October 2021. This instantly made waves in Buffalo, the NFL, and the entire nation. No one in Buffalo could believe it, and everyone had the same question: so what happens now, and how could this affect the final preseason game the next day?

Well, the news affected the final preseason game quite a bit. The Bills had their first preseason loss after 11 straight preseason wins, along with losing in a shutout. Araiza was not present for this game after the allegations were released the previous evening. Since he was not in attendance for the game, they needed a backup punter, who turned out to be backup QB Matt Barkley. Barkley turned out to be a surprisingly good backup, letting loose a 53-yard punt. Even with Barkley being a bright spot in an otherwise bleak game for the Bills, a lot of people were still very stirred up about Araiza, and were wondering what management was going to do about it.

Well, the answer to that question came the very next day. On August 27th, Bills general manager Brandon Beane and Sean McDermott held a press conference stating that Araiza had been released. During the conference, Beane stated: “We don’t know all the facts, and that’s what makes it hard, but at this time we think it is the best move for everyone to move on from Matt and let him take care of this situation.” Although the team was made aware of the allegations against Araiza in late July after he was already drafted, they tried to be thorough and not rush judgment. Many people throughout the NFL fan base thought that this was the best outcome to come out of a terrible situation, but that still led to one more question: how were they going to do without a punter?

Before the Bills season opener in Los Angeles against the Rams, they drafted Sam Martin, a former Broncos punter, to a one-year contract. Although in their first regular season game vs the Superbowl winning Rams, it looked like they would’ve been just fine without one. They didn’t punt once in this game, meaning that they haven’t had to punt in 3 of their last 4 regular season games. They had a phenomenal game in stats once again, with 23 total first downs and 413 total yards. Although they had 4 turnovers in the game, it didn’t slow their roll in the slightest. It was a statement win, and that statement was something like this: although they had a bumpy start to the year, the drama was gone, the Bills weren’t going anywhere, and they were going to do everything in their power to make the 2022-23 season theirs.