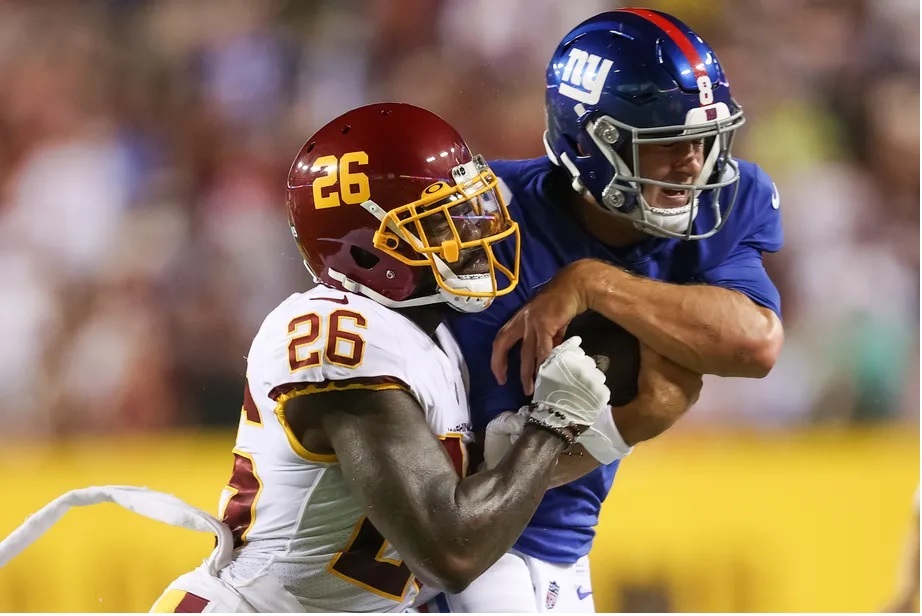 In the second week of the NFL 2021-22 season, neither the Washington Football Team or the New York Giants had a great record. Both teams were at 0-1, since both lost their Week 1 games (Washington lost to the Los Angeles Chargers 20-16 and the Giants lost to the Denver Broncos 27-13). Both teams walked into FedEx Field looking for their first win of the season, and fans from both sides were ready to see who emerged victorious.

The first quarter started off pretty shaky for Washington, considering that 45 seconds into the game, quarterback Taylor Heineke was sacked by linebacker Azeez Ojulari. With 12:14 remaining in the first quarter, Giants quarterback Daniel Jones fired a pass to wide receiver Kenny Golladay for a 17 yard gain. With 11:20 remaining, Jones tries to sneak through the Washington defense for a running play but is pulled down before the start of scrimmage, for a loss of two yards. With 9:27 remaining, Jones sneaks out to the left of the field, running the ball for a first down and more, leading the Giants to Washingtons’ 15 yard line. With 8:21 remaining on a 2nd and 12 play, Jones passes an incomplete. After the whistle blew, a flag was thrown against Washington defensive end Chase Young for a personal foul, giving the Giants a first down. With 7:39 remaining, Jones runs the ball into the end zone for the first touchdown of the game, receiving the first points of the game for a 7-0 lead. Washington did have possession of the ball but had to punt. With 5:52 remaining, Saquon Barkley catches a pass from Jones and runs for a massive gain down the sideline, getting pushed out of bounds after making it into Washington territory. With 3:49 remaining, Jones is unable to get away from the Washington defense and is sacked for the first time in this game for a loss of 7 yards. Washington made their first big play of the game with 1:11 remaining, with Heineke firing a pass downfield to rookie wide receiver Dyami Brown. This gave Washington their first first down and a 22 yard gain.

Washington still has the ball to start off the second quarter. After taking a risk on a 4th and 1 after being short on a play, Washington gets another first down. With 12:04 remaining in the second quarter, Heineke launches the ball to wide receiver Terry McLaurin for a huge gain in yards. With 11:23 remaining, Heineke passes to McLaurin again for Washingtons’ first touchdown of the game, taking the score to 7-7. With 10:42 remaining, the Giants have possession. Jones is unable to pass and is once again sacked by Washington defensive end Jonathan Allen. The Giants are unable to make moves and Washington receives the ball, but struggles a bit to get downfield. On a 3rd and 22 play, Jones passes to runningback J.D. Mckissic for a gain, but they’re unable to get a first down. With 6:20 remaining and the Giants in possession, Jones takes off running downfield from Washingtons’ 42 yard line into the endzone, but doesn’t end up with a touchdown due to a holding call on wide receiver CJ Board. With 4:13 remaining, Giants kicker Graham Gano gets a field goal, bringing the score to 10-7. Washington marched their way downfield with the last four minutes of the half. With 23 seconds left, Heineke passes to McKissic for another touchdown, taking the score to 14-10 to end the half.

The Giants have possession of the ball to start off the second half, and they’re looking to take away Washingtons’ lead. The Giants have phenomenal running and passing drives going as they make their way downfield into Washington territory. With 9:13 remaining in the third quarter, Gano is up once again to make his second field goal of the game, taking the score to 14-13 with Washington maintaining their lead. With 7:45 remaining and a 3rd and 2 play, Heineke throws the ball downfield but the pass isn’t caught, leading to an incomplete and a punt. With 6:46 remaining, Jones passes the ball towards wide receiver Sterling Shepard, which is incomplete. A flag is thrown on Washington cornerback Kendall Fuller for pass interference, which is an automatic first down for the Giants. With 6:39 remaining, Jones hands off the ball to Shepard, who is caught in the backfield by Young, causing a loss of yards. The Giants come back from a 2nd and 19 play, marching their way back downfield with multiple first down passes. With 4:48 remaining, Jones fires a pass downfield to wide receiver Darius Slayton for another touchdown, giving the Giants the lead with a score of 20-14. With 4:11 remaining, Heineke throws the ball which is almost intercepted, but isn’t caught for an incomplete. A flag is thrown against Giants cornerback James Bradbury, giving Washington an automatic first down. With 1:38 remaining, kicker Dustin Hopkins drills a field goal, taking the score to 20-17.

With 15:00 remaining in the fourth quarter, the Giants have possession of the ball and are looking to maintain their lead over Washington for the last quarter. Jones drops back and is looking to throw when he is once again sacked, this time by Fuller. With 13:39 remaining, Gano is on the field again to make a 52 yard field goal, taking the score to 23-17. Washington makes their way downfield with multiple great passes and running drives, leading to their second field goal attempt of the game. With 8:49 remaining, Hopkins makes the field goal, bringing the score to 23-20. The Giants make their way downfield, giving them another field goal by Gano with 4:54 remaining, bringing the score to 26-20. With 4:41 remaining, Heineke throws the ball to tight end Ricky Seals-Jones in the end zone for a touchdown, taking the score to 27-26. This was also Seals-Jones first catch and touchdown with the Washington team. With 2:22 remaining, Heineke throws the ball, but it is picked off by Bradbury for the first turnover of the game. With 2:07 remaining, Gano is brought back onto the field to make another field goal, bringing the score to 29-27. Washington fights back hard for the last two minutes of the game, bringing them their final chance to win the game with a 48 yard field goal attempt by Hopkins. With :05 remaining in the game, Hopkins kicks the ball and it’s no good, but a flag is thrown. It’s against Giants defensive tackle Dexter Lawrence, giving Hopkins one more chance to make the field goal. It’s now a 43 yard attempt, which Hopkins drills between the goal posts. Washington wins the game 30-29.

So… why is it a favorite?

This game wasn’t even on my radar until the fourth quarter. I saw the score quickly changing back and forth between each team having the lead and decided to keep watching it, and boy, was I sure glad I did. Washington has always been one of my favorite “underdog” teams to watch when I see their games during the season, and I’ve actually been rooting for them for years. This was one of my favorite fourth quarter games, from watching Washington have such a turnaround in the fourth quarter to them keeping their fight until literally the last second. The final field goal had me jumping up out of my chair, cheering with every other Washington fan in the stands, and I will never forget how excited I was to see the underdog come out on top.