NO WAR IN UKRAINE: The Silent Protest Heard Across the World 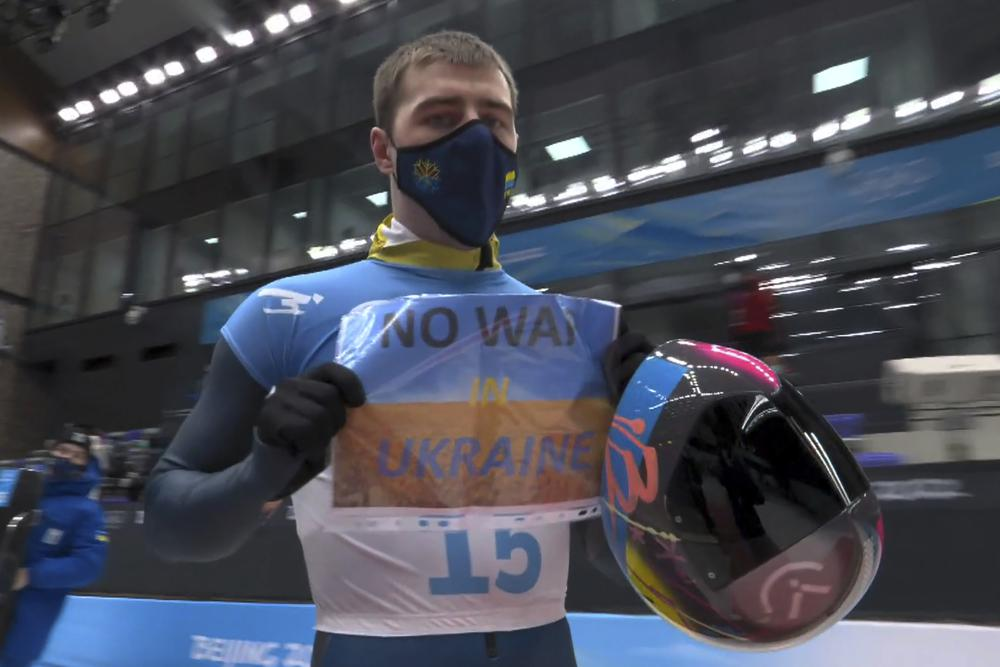 On February 11, 2022, Vladyslav Heraskevych, the Ukrainian skeleton racer, silently protested for his country. The small 8 x 11 paper was televised throughout the world in hopes of using his platform as a cry for peace among his people.

Vladyslav Heraskevych, born and raised in the capital of Ukraine, Kyiv is the first ever Ukrainian skeleton racer. The athlete is trained by his father Mykhailo Heraskevych who is the head coach of the Ukrainian Skeleton team.

Vladyslav graduated from the faculty of physics at the Taras Shevchenko National University of Kyiv. The homegrown athlete debuted in the Skeleton World Cup in Lake Placid in 2017. He later competed in seven of eight events to qualify for the 2022 Beijing Winter Olympics.

A Cry for Help

With tensions rising between Russia and Ukraine, the question at the time was whether the athlete was coming home to war. After his final run, the athlete displayed a small sign with his country’s colors in the background stating “NO WAR IN UKRAINE”. Heraskevych wanted to use his platform to silently protest and bring awareness to the severity of the crisis back in his homeland.

The International Olympic Committee follows an organized set of rules called the Olympic Charter. With Heraskevych’s actions, the question arose on whether or not the athlete violated Rule 50.

The rule was formatted in 1975 and first stated “no form of advertising or other publicity shall be allowed in and above the stadia, venues and other competition areas which are considered as part of the Olympic sites”. (Olympic Charter, 1983. Lausanne: Comite International Olympique, 1982. Print.) The rule has since been rewritten, but the ideal stays the same. No signs of political displays and demonstrations should be allowed on Olympic sites.

After further review from the International Olympic Committee (IOC), they came to the agreement that Heraskevych’s actions were not of a political agenda, but of a general cry for peace.

Since the finale of the Beijing Winter Olympics, Russia has declared war on Ukraine which has led to a worldwide crisis. Thousands have evacuated and many more citizens of the Ukraine have stayed back to defend their country.

Days away from the opening ceremony of the Paralympics, the question quickly formed as to whether the athletes of Russia and Belarus should be allowed to compete. More than sixty Ukrainian athletes wrote to the IOC pushing them to sanction both Russia and Belarus in hopes of barring the 72 athletes from the tournaments.

Running out of time and under the global eye, the International Olympic Committee came to the agreement that although the actions of Russia are inhumane and unjust, the athletes will be allowed to compete in this year’s games. With that being said, the IOC has recommended that all future events and competitions that were to be held in Russia will be canceled.

In 2019, Russia was caught by the World Anti-Doping Agency for running a state-sponsored doping ring. As a result, the country was banned from any national competition for the following four years. The IOC has reinforced this rule and will not tolerate any signs of political propaganda within the upcoming games. Although Russia has been banned, Russian athletes not linked to the doping scheme have been allowed a loophole to compete as a neutral party known as the Russian Olympic Committee (ROC).

Vladyslav Heraskevych, the 23-year old athlete has since been in-touch with the Olympic board and stated in an interview with the Associated Press, “I am a student, I am not experienced in these types of things. But I am ready to stand strong and help anyway I can”. Heraskevych has made the decision to stay back and fight for his country, believing that if he doesn’t he may not have a country to represent in any future Olympics.