Proud Family Reboot: Is it necessary? 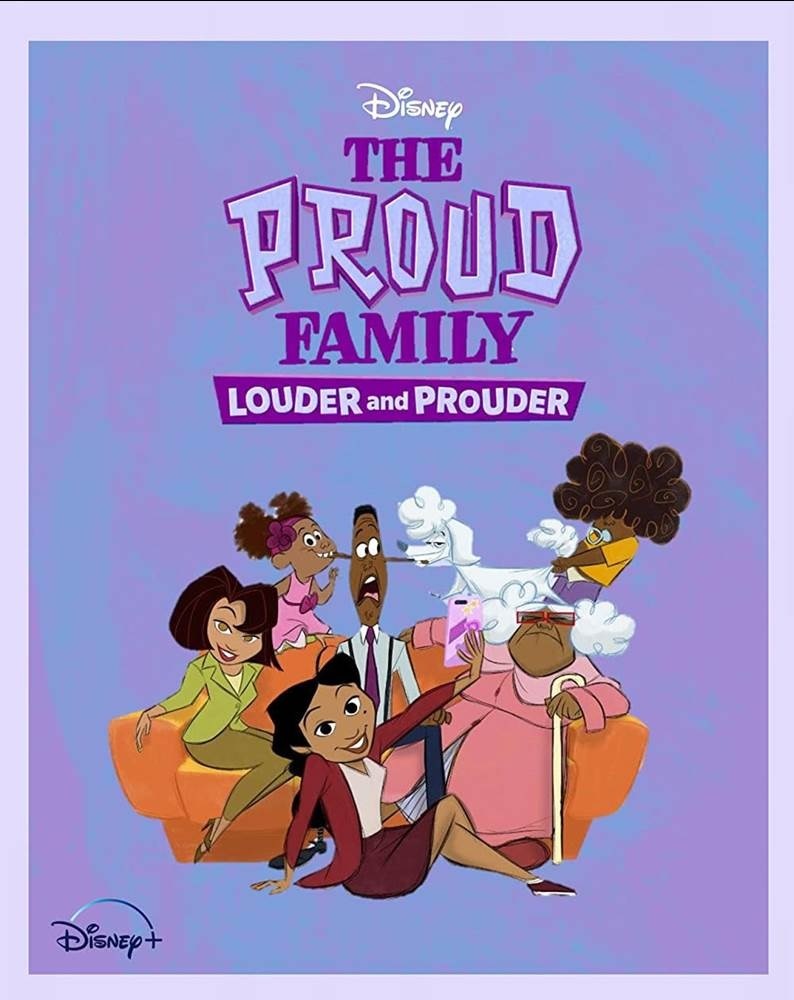 If you are a late 90s kid or a kid that was born in the early 2000s who grew up watching Disney channel then you must know what the Proud Family is. But for those of you who may not know what the show is or what it is about, the show is animated, and it follows a 14 year old girl named Penny Proud. Penny comes from an African-American family: Trudy(mother), Oscar (Father), BeBe (little brother), CeCe (little sister), and Suga mama(grandma). The show is about Penny going through life as a teenager with her friends by her side: Dijonay, Lacienega, Zoey, and Sticky.

On February 23, 2022, the Proud Family released their reboot, The Proud Family: Louder and Prouder on Disney+. The show picks right back off with Penny and her friends and family’s lives. Penny is still 14 years old on the show. People including myself had a problem with this because in 2005 The Proud Family came out with a movie. In the movie Penny turns 15 years old but now in the reboot she is back to being 14 years old. It’s like the movie never happened. Another reason why people had a problem with Penny’s age is because this reboot happened 20 years later. Penny and her friends are supposed to be either in college or experiencing adulthood. People have been curious as to why Penny is still a teenager. I feel like if the writers and the creators of the show wanted Penny to stay a teenager they should have had her be 16 years old because the viewers didn’t get to see Penny at that age.

With reboots more than likely you will see some changes within the show. For instance, the original characters had a few minor wardrobe changes. Instead of light blue capris Lacienega is known for wearing, Lacienega now wears light blue ripped jeans. In the first Proud Family Penny wears this burgundy skirt that made her outfit look like a schoolgirl. Now she wears a denim burgundy skirt. Zoey used to wear a light green shirt and brownish green skirt. Zoey style now consists of a light green shirt, green skirt, and blue jean jacket. Another change Zoey experienced is her height, she is taller than she was before. In this reboot she does wear green platform shoes instead of sneakers, but she still has a noticeable height difference with or without the shoes. As for Dijonay, she still looks the same. The only real difference Dijonay has is her body type. Penny’s younger siblings had a minor change. They look about one year older than they did before. Before the twins used to just crawl around but now they can walk and talk. Now they are wearing clothes instead of just wearing diapers. One of the twins CeCe appearances has changed and that being her hair and face. As for Oscar, Trudy, and Sugar Mama they are still the same.

While still talking about changes in the show the character Sticky has been written off the show. The reason why Sticky has been written off the show is because of the problems the voice actor is dealing with. Since Sticky is written off the show the creators needed to add a character or three to replace Sticky in the friend group. One character who is now officially a part of the friend group is Michael. Michael used to be in the original Proud Family series but only as a recurring character. Michael in the Original series used to be short, wore baggy workout clothes, and a mini afro. Now Michael has black and pink hair, wears black/navy blue shirt and pink pants with black suspenders, black ankle boots, and glasses. Out of all the original characters Michael has changed the most. Michael is now an openly gay character. There is an article that I found talking about Michael and in this article the article sees there is a problem with a new reinvasion Michael. The article finds Michael to be a stereotypical gay character. According to “The Problem With Michael in ‘The Proud Family: Louder and Prouder’” the article states “The problem with Michael is that by making his ambiguous homosexuality canon, his character at this point only sits in the realm of stereotype.” One stereotype the article found was the fact that Michael loves fashion. “The effeminate gay fashionista is a tired trope by this point and Louder and Prouder does little to elevate this trait beyond its stereotypical origins. Perhaps later we’ll learn how Michael came to love fashion but for the moment it’s left in the realm of stereotype.” I do agree with this article to a certain extent, I like that Michael is now more open and he likes fashion, but I don’t see it as a problem. Do I think it is stereotypical? Yes but is it a problem? No. I like the new Michael and I like that in the reboot the viewers get to see him more.

Like I stated before the creators added three more people to Penny’s friend group. I already talked about Michael but let’s talk about the two other characters, Maya, and KG. Maya and KG are two new characters on the show. They are both adopted, they are adopted by two men who are openly gay. Maya is the one who is all about black culture and activism. KG in a way is kind of like Sticky. They both share some similarities. One being that they are intelligent. They like to invent cool gadgets. Another similarity they both share is they are always running away from Dijonay. In the original series Dijonay had a huge crush on Sticky but now since Sticky is written off the show Dijonay has a new attraction towards KG. Both KG and Sticky don’t like Dijonay because she is overly clingy. At first Maya didn’t like Penny because she assumed Penny to be the stereotypical popular girl but after an incident which Dijonay caused by telling everyone that Maya and KG have two dads, Maya seen that Penny was taking a stand against the people who were bullying Maya and KG for having two dads.

The original Proud Family series was known for talking about serious issues and the reboot adapted that into the show. The only difference between the two regarding talking about serious issues is the reboot is able to talk about things more freely that the original Proud Family or any other shows wasn’t really able to talk about in the early 2000s. The reboot talks about issues like LGBTQ+, animal cruelty, social media, and more. I think that it’s amazing how much time has changed because before people couldn’t really talk about issues like LGBTQ+ in the early 2000s because a lot of people were not open to have that conversation but now in today’s generation people are now being more open with their sexuality. There are still people who have problems with people being open but at least now many people are accepting those who are openly a part of the LGBTQ+ community. I also think it is cool that even though the show is really meant for the ones who grew up watching the show, the show incorporates today’s issues like the power of social media and canceled culture. It shows that even though the show is nostalgic it has some modern feels to it and the show also caters to today’s generation as well.

Shockingly a lot of people are enjoying the reboot and the reason why I say it is shocking is because the Proud Family is a loved show but when people hear that a show or movie that they like are being rebooted people usually have problems with it. For example, the movie Aladdin. When the news got out about the reboot of Aladdin people were not happy. They were not happy because people felt like there was no reason to turn an animated movie into a live action. Also, because the late great Robin Williams passed away 2014. Robin Williams played the genie and people didn’t think anyone could play the role of the genie like Robin Williams. When people heard about Will Smith playing the genie people still weren’t sure about the reboot but after the movie came out there were a lot of good reviews on the movie. On social media people have been raving about the Proud Family: Louder and Prouder. According to an article by Buzzfeed, “19 Fan Reactions To “The Proud Family” Reboot” here are some tweets people have been saying about the reboot. “The proud family reboot is fire”, “i am literally obsessed with the proud family louder and prouder. so many talented black creatives working on this series and it shows. this is why we want black creators to make black things. give black creators a chance.”, and “The Proud Family Louder and Prouder is… perfection… wow. My inner child is so fulfilled.”

Overall, I would rate the reboot as an 8.5 or 9/10. The reason for that score is because the show is not over yet and I think there is still some room for improvement. In my opinion it is a really good show. I recommend that if you haven’t you should watch the show but if you never watched the first Proud Family I would recommend that you watch that first because the reboot does talk about scenes that happened in the original Proud Family. Also, to see the difference between the two shows. I was a big fan of the Original Proud Family and I still am. I’m just glad that the show did not change completely because it still gives me that nostalgic feeling. I think it was a good decision for the creators to make a reboot of the Proud Family.