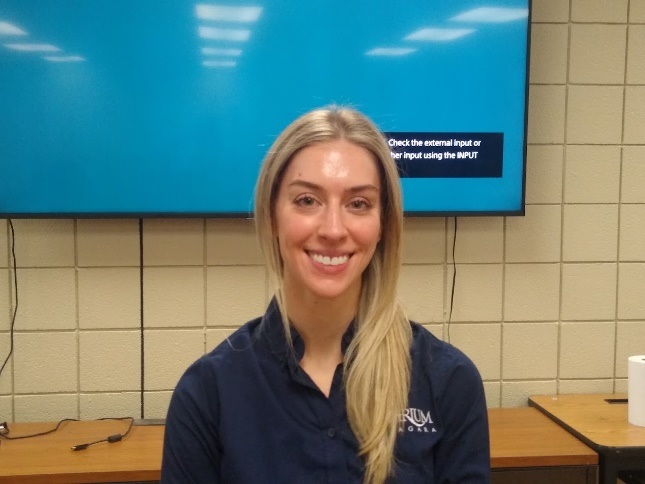 The Zoo Crew Club members have invited Aquarium of Niagara employee Samantha Dorsaneo to share her presentation of conservation efforts and the work purposes of zoos and aquariums for World Wildlife Week.

Sam was a student here at NCCC and was in the Animal Management program, which led into her career at the Aquarium of Niagara. She has been an employee for 8 years, she became a part-time to full-time educator, and was now a part-time aquarist to a full-time marine mammal trainer.

She gave a presentation to the Zoo Crew members about the work that has been done in zoos and aquariums, and she also educates them about conservation efforts that has been achieved. The purpose of the presentation is to educate the club members about zoos and aquariums’ participation in conservation obligations and research that has been done to study and conserve endangered and threatened animal species. “I like that I was able to come back and talk to the Animal Management class that I took a while and it was nice to come back and explain to them different areas of conservation and research that zoos and aquariums can participate in, so it’s kind of shedding light on things. The public isn’t previewed, so they don’t really know of what is happening behind the scenes. So, I think it’s kind of cool to highlight that,” said Sam.

During her presentation, Sam was showing the conservation efforts and research that the Aquarium of Niagara has participated in. For example, the aquarium is participating in the Species Survival Program for Humboldt penguins, and it also supports the Lake Sturgeon Reintroduction program, while working with the Development of Environmental Conservation (DEC) to release juvenile lake sturgeon back into their natural environment.

The achievement of the presentation is educating how zoos and aquariums, especially the Aquarium of Niagara gets accredited by the Association of Zoos and Aquariums (AZA) and other non-profit organizations like the International Marine Animal Trainers’ Association (IMATA) and the Alliance of Marine Mammal Parks & Aquariums (AMMPA). The Aquarium of Niagara gets accredited by those non-profit organizations because they are supporting conservation objectives of endangered or threatened wildlife and their environment. Therefore, they can understand the species’ behavior and their population more clearly, such as they will observe and analyze the animals’ behavior and the population, they lived in. “So, we talked about how we became accredited by the Association of Zoos and Aquariums, and we talked about how the aquarium has become accredited by IMATA, which are those mammals’ specific organizations, we talked a bit about how we participated in the Humboldt Penguin Species Survival Program, the lake sturgeon introduction that we’re doing with the DEC (Department of Environmental Conservation). So, we touched on a little bit about conservation efforts at the aquarium participating in, and we assist with research projects in some that were also taken on ourselves” Sam said.

Sam’s presentation is fairly connected to World Wildlife Week because this is something where individuals can get engaged by helping wildlife in their community such as recycling responsibly or educating their friends and family. President of the Zoo Crew club Trinity Rafter says, “I think it’s a celebration for all of the amazing creatures that inhabit our world and highlight issues that need to be addressed to protect them in the future.” Sam has done a wonderful job educating the Zoo Crew members about the conservation efforts and the work that they do at the aquarium. Her wonderful presentation will captivate individuals’ attention on what they should do to help wildlife in their community.