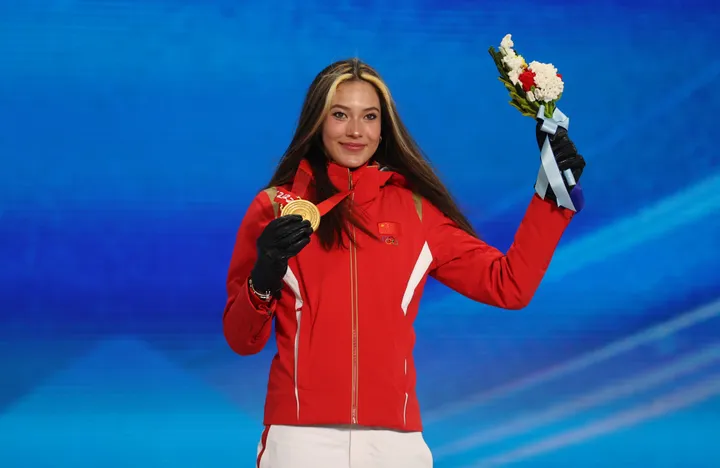 Eighteen year old Eileen Gu became the youngest Olympic champion in freestyle skiing at this year’s Beijing Winter Olympics. She is the first freestyle skier in the history of the Olympics to win three medals at just one single event. The three time Olympic medalist not only has carved a new path in the sport but is a well-known model for the largest brands in both America and the West.

Gu’s mother, Yan Gu, was born in Shanghai and raised in Beijing. Not only was she a first generation immigrant, but she raised Eileen as a single mother. Yan Gu always had a passion for skiing and even became a ski coach back home in China. There she attended Peking University for her undergraduate and masters in chemical engineering.

Gu’s mother moved to the United States in hopes of the ‘American dream’ in her early twenties where she was enrolled in Auburn University and after graduation enrolled at Rockefeller University. Her passion for skiing led Gu to move both her and her daughter to the San Francisco area where she was able to teach Eileen how to ski, and received her MBA from Stamford.

Eileen Gu was taught by her mother from an extremely young age how to ski and enrolled in lessons in Lake Tahoe. Although skiing was important, family came first. From a young age, Eileen Gu would spend summers and breaks in Beijing with her grandmother and has embraced her Chinese heritage and is fluent in both English and Mandarin Chinese.

The three time Olympic medalist’s career has just begun. Although her skill set is evident, the country she represents has become a hot topic.

Eileen Gu competed for the American Ski Team up until 2019 where she requested a change of nation with the ISF. Gu claimed on an Instagram post, “although the decision was hard,” she stated she wants to embrace her roots and help inspire the Chinese youth while forging friendships between nations.

Not only is Gu an outstanding freestyle skier, but she is a tremendously successful model. Gu is estimated to have made over 35 million dollars in endorsements and sponsorships from Cadillac, Louis Vuitton, Tiffany & Co.Oakley, and VISA. She is also known to be the face of more than thirty Western companies.

The eighteen year old athlete won gold in both the Women’s Big Air event and the Women’s Halfpipe. She also brought home a silver medal in the Women’s freestyle. This added to China’s fifteen medals but brought them the lead over the United States because of her two gold medals bringing China’s golds to 9 over the USA’s 8 gold medals.

The eighteen year old has carved her name not only in the sport, but in the Olympics itself. Gu has reached her goal of inspiring the Chinese youth and impacted athletes and fans worldwide. She has set the bar at a new height in freestyle skiing, but her mastery of business and ability to create a platform will create a whole new dimension to the depiction of an Olympic athlete.