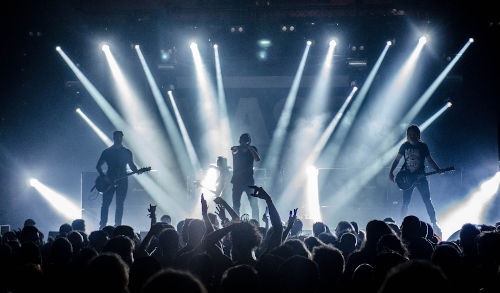 Disclaimer: This article is written by a drummer who will be taking part in the concert.

Do you miss the days of rocking on at a concert with your friends, jamming to music and hearing new sounds that you haven’t heard of before? Well you’re in luck, because starting on April 28th, there will be a 3 day show going on at the NCCC campus in the auditorium! Come watch people who love to play music on stage! This end of the year concert is a final grade for some of these bands, whereas the others just want to hop on stage and have some fun just before this school semester ends.

On Thursday, April 28th at 12:30 till about 1:30; Friday, April 29th at 7:00pm; and on Saturday April 30th at 2:00, you can find several talented bands playing their hearts out on the auditorium stage. The show is free to attend, so what’s stopping you from listening to some live music?

Here we will list some of the bands and artists you will be hearing on April 28th, 29th, and the 30th (not in any particular order);

Playing on the stage will be David Kane’s ‘Introduction to electronic music’, where a smaller class will be playing what Mr. Kane calls “Equivalent to a sound that you’d hear in a horror film”. David Kane also said that they will be playing what was called a dreamy sound scape. I can’t wait to hear what they bring to the stage, it sounds like it’ll be fun!

From the ‘Rock Band’ class run by Elliott Hunt, you can expect to see two bands playing on the stage; ‘Greasy Soupman & GL Sturgeon’ and ‘Crash & Burn’. Both bands were asked to prepare 4 covers of songs and 1 original song at the beginning of the semester, and are excited to share what they’ve been practicing.

In the ‘Greasy Soupman & GL Sturgeon’ we have Nick Malyk as lead vocals and lead sax man, Joey Torres on drums, Jackson Sickler on guitar, Mateo Orfano playing the bass, and Josh ‘Mountain-Pleasant’ on the keyboard. When I asked the guys what songs they were going to perform I was told “Good ones” (Thanks Mateo). They will be performing songs like, “Way it Goes” by Hippo Campus, and “Move” by Saint Motel.

The next band from the same Rock Band class is a group that goes by the name ‘Crash & Burn’, featuring Orianna Pritchett or ‘lady O’ as the lead singer, Ian Dennniston on guitar, Katus Khaos on bass, Alexus Huston or ‘Lexi’ on drums, and Danny Rock on guitar. ‘Crash and Burn’ are excited to be performing “Pompeii” by Bastille and “The Rock Show” by Blink182.

I have been told that Dr. Hyekyung Park will be performing a piano piece during the days of the concert.

I believe that Lisa Surace will be making a performance as well as some of the members in her class.

I have heard rumors that Josh Wagner might be performing with his students.

Of course, there may be some other performances I did not mention, whether they be other classes or solo performances, I am excited to hear what beautiful music will be heard the day of the show.

This show is to show off what these musicians have been working on through the semester, so come support them! This event is free to attend so why not come enjoy the sweet sounds of the talented musicians and what they’ve been working on this semester. You’ll have a good time no matter what.

How Do I Get an Enrollment Verification?