Prayers for Prey for the Devil 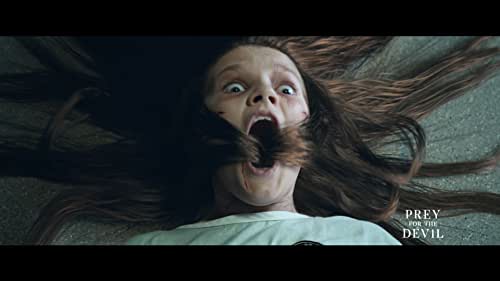 A horror movie released the weekend before Halloween leads to high expectations, but Prey for
the Devil falls just short of its lofty goals. Scoring only 19% on Rotten Tomatoes and making 7
million dollars in its opening weekend, Prey for the Devil is neither a failure nor a rousing
success.
Prey for the Devil was directed by Daniel Stamm (who also produced The Last Exorcism) and
starring Jacqueline Byers as Sister Ann, a nun whose dream is to be the first female exorcist.
Sister Ann lives in a school opened by the Catholic Church to combat a rising number of
possessions. After a professor recognizes her talent, he agrees to train her in the rite of exorcism
despite protests from the people around him, and Sister Ann must fight her own demons in order
to save her own soul and the soul of Reagen (played by Posy Taylor), one of her young patients.
For a movie that clearly set out to tackle trauma, gender inequality in the Catholic Church and
reproductive rights, I was highly disappointed. As for just watching a scary movie, it was half
decent.
The movie relies heavily themes of adoption, abortion, and the complexities of motherhood, but
fails to handle either topic with any particular amount of grace or tact. After the overturning of
Roe v. Wade this summer and the recent scandals that the Catholic Diocese has faced, these
topics are clearly heavily on the cultural zeitgeist. Neither of the attempts to emotionally connect
with the audience ring true, and it ultimately comes out feeling kind of girl boss-y. The attempt at
the feminist take is good change in pace, but just putting one woman into a place of power that a
man normally holds feels like a hollow victory after the last few years. While I do appreciate the
attempt at modernizing the Catholic horror movie, it feels like re-watching The Exorcist.
There are a handful of good jump scares, and it is pretty creepy for a PG-13 movie. Like most
modern movies, it is slightly too reliant on CGI, but still uses some cool practical effects. The
creep factor when the demon communicates to Sister Ann through its victims and Reagen’s hair
gets sucked into her throat is bone chilling. Most of it is spent on building suspense, but it
doesn’t build it in the right spots. We spend a lot of time with Sister Ann, but very little with
Reagen. Posy Taylor did a wonderful job in this movie, and I don’t think that this movie did her
talent enough justice. The connection between Sister Ann and Reagen is very clever, and the way
the audience was shown it was a very cool moment. However, the pacing is a little bit odd. Most
of the scary parts don’t come in til the very end.
The most impressive part of the movie was the acting. The actors had a pretty weak script, but
did an incredible job of making it convincing. For Posy Taylor’s first big screen debut, she did a
very impressive job of playing both a meek young girl and the demon who had taken over her
body. Jacqueline Byers and Christian Navvaro (Father Dante) also did a wonderful job of
building a friendship between their two characters. When Father Dante begs Sister Ann to
preform an exorcism on his sister who had an abortion, and Sister Ann confides in him about
having given her daughter up for adoption, it feels kind of genuine, despite the weak writing.
Overall, I would give the movie a 3.5/5. It wasn’t very original, but the thought was there. There
were some spooky moments and while there was a touch too much CGI for my taste, it wasn’t
overly reliant and used a few practical effects too. Much like its other PG-13 horror movie
predecessors (think: Oujia and Lights Out), this would be a good movie to help young teenagers
break into the horror genre. It has earned its spot on my ‘best bad horror movies’ list.