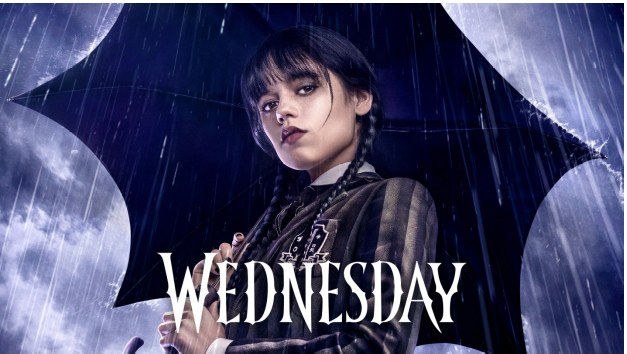 Instead of focusing on the entire Addams family this time round, the new Netflix series centers around Wednesday Addams. Played by the magnificent Jenna Ortega, the show starts with Wednesday getting expelled from her high school and her parents Gomez and Morticia sending her to Nevermore Academy, the school where they met and fell in love. Wednesday is not a fan of this idea, believing that her parents want her to follow in their footsteps. While Wednesday begins to settle into her new school, a mystery begins to unfold involving her and others that attend Nevermore. Throughout the entire show we see Wednesday put on her Sherlock Holmes hat and try to figure out what is really going on at both Nevermore, and the local town Jericho.

Without giving any spoilers, I cannot begin to explain how much I love Ortega as Wednesday. Her take on Wednesday isn’t that different from the other versions we have seen, but her version in some ways feels more fresh and rich. It really feels that she was born to play this character. And with this show revolving around Wednesday instead of her entire family, we learn so much about her and her take on her family and why she acts the way she does.

The Netflix series also has a brilliant ensemble of actors that include Luis Guzman (Gomez), Catherine Zeta Jones (Morticia), Fred Armisen (Uncle Fester), and previous Wednesday Addams herself, Christina Ricci. Ricci this time plays Mrs. Thornhill, the first ever ‘normie’ teacher at Nevermore Academy. The show does an excellent job of not making you think about Ricci being a previous Wednesday, instead making her a bright, uplifting redhead who tries to help Wednesday tackle Nevermore Academy.

We also have yet to mention Tim Burton, the creative genius who directed this series. When you watch the show, you can just tell without knowing that this was Burton’s direction. With the creepy monsters, diverse characters, and overall horror throughout the series.

Overall this show is an interesting take on the beloved Addams Family, and makes Wednesday a way more loved and favorite character.. One of the only issues I had with it is that it’s very modernized. With the mention of cell phones, texting, social media, and the vernacular some of the students have. Other than that, this was a great show. I loved how different but also similar it felt to the previous films and shows we have seen. This show would have such a different feel if Jenna Ortega wasn’t Wednesday. ‘Wednesday’ is available to watch on Netflix right now!