The Friendship of Trainer and Animal: Marine Mammal Training 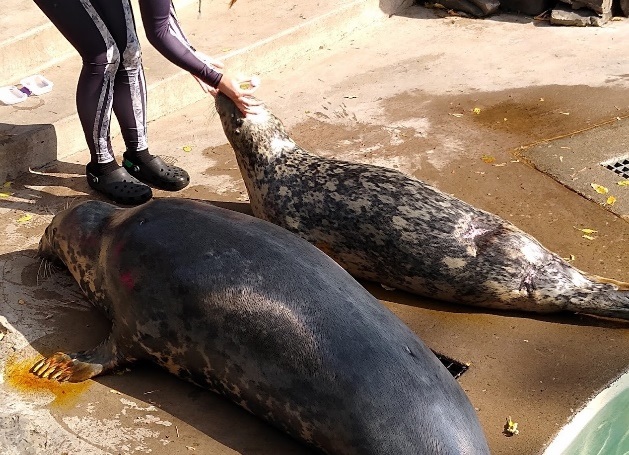 The Aquarium of Niagara is home to 10 rescued marine mammals. The seals and sea lions are all rescued after struggling in their native environments for variety of reasons, including over-reliance on humans for food, being abandoned by their mothers, having bilateral cataracts, suffering from malnutrition, and suffering from boat crashes. For example, California sea lions, Kiah and Arie were both rescued off the coast of California, because they keep on approaching humans for food. The Marine Mammal Care Center released the two sea lions back into their environment. Kiah was released two times, and Arie was released three times. Both of them came back and begin approaching humans for food.

Both then made their way at the Aquarium of Niagara, where they will have all the care they need for the rest of their lives. Stryker the harbor seal pup, another rescued marine mammal, was rescued from New Jersey after he was struck by a boat “that severed his hind flipper.” Unfortunately, Stryker failed his swim test, and they were force to amputate his hind flipper. Finally, Stryker has made his way to the Aquarium of Niagara as his forever home. These animals do not have the survival skills they need to survive in their natural environment, which makes them deemed non-releasable by the U.S. Government. The seals and sea lions have received all the care they need from their trainers. The seals, sea lions, and trainers have a wonderful bond, and they both trust each other. One of the biggest roles that marine mammal trainers do is to take care of the animals; making sure they’re healthy. Marine mammal trainer Hallie Torre explains, “We do a lot of shows and presentations in order to educate guests, but our biggest priorities is making sure the animals are very well taking care of, so a lot of behaviors we’ve trained them include healthcare behaviors like we do eyedrops with them, we will trim their nails, and we can do voluntary blood draws.” The marine mammal trainers also perform sea lion shows and seal presentations to educate guests about these magnificent sea animals. The purpose for the sea lion shows and seal presentations is to show guests how amazing these animals are, especially the aquarium’s California sea lions. They wanted to show guests how intelligent and playful they are.

Sea lions and seals are highly intelligent animals, and they are known for their playful behavior. Another objective for sea lion shows is to educate guests about the threats that these marine mammals face in their natural environment. This would engage guest’s attention on what they would do to help animals from the ocean such as recycling responsibly, and making sure we’re not throwing trash irresponsibly. “We really like to really kind of show the world how amazing these animals are, so you know that’s why you’ll see one of the fun high energy behaviors that we do with our animals like leaps and jumps, because we’re really trying to show how amazing these animals are, you know what they’re capable of, what we can truly show because we want everyone to take what they see here at the aquarium,” said Hallie Torre. The marine mammal trainers, seals, and sea lions had a wonderful strong friendship. The trainers form a special relationship with these animals in order to gain their trust. The more the animal trust their trainers, the more they form a special friendship with their trainers. The bonding between human and animal is all about trust, patience, and positive reinforcements. If we can do the same with our animals at home, we can build up a whole new level of trust.